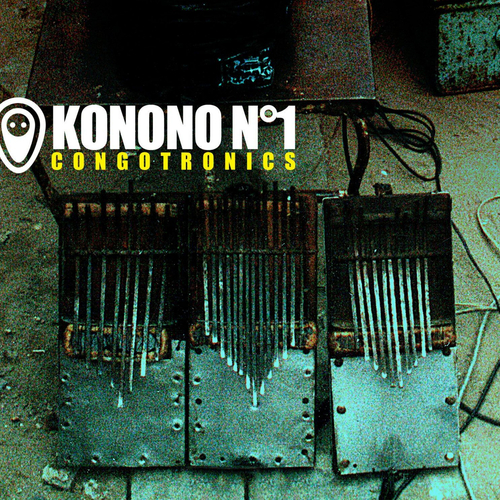 Konono No.1 was founded over 25 years ago by Mingiedi, a virtuoso of the likembé (the traditional instrument sometimes called “sanza” or “thumb piano”, consisting of metal rods attached to a resonator). The band’s line-up includes three electric likembés (bass, medium and treble), equipped with hand-made microphones built from magnets salvaged from old car parts, and plugged into amplifiers. There’s also a rhythm section which uses traditional as well as makeshift percussion (pans, pots and car parts), three singers, three dancers and a peculiar sound system including megaphones dating from the colonial period, which they call “lance-voix” (‘voice-throwers’). The band's repertoire draws largely on Bazombo trance music, to which they’ve had to incorporate the originally-unwanted distorsions of their sound system.

World music, electronica and avant-rock aficionados have all been equally amazed by this otherworldly music, which has driven the international press to come up with some surprising comparisons (from Can and Krautrock to Jimi Hendrix, Lee Perry and proto-techno!...).

Konono No.1 earned a BBC Award for World Music, prestigious publications ranging from Newsweek, Rolling Stone, The New York Times and The Times (UK) enthused about their sound, and they were massively adopted by the alternative rock scene in the US: they played festivals such as Coachella, and the album was quoted among the best records of the year by countless blogzines as well as by artists like Beck, Wilco and… Björk, who ended up inviting them to appear on her "Volta" album, and to perform with her on her 2007 New York shows.

Somewhere between the motorik Kraut-rock repetition of prime Can, a Brazilian carnival and pre-historic acid house” (The Word, UK)

Sounds like no other type of African music... The sophisticated brutality of Konono No.1 leaves permanent traces in the conscience of the listener” (Les Inrockuptibles, France)

The frenzy and locomotion of prime '70s Miles or a Krautrock jam ! (The Village Voice, USA)

MP3 format technical details
These mp3 tracks have been encoded with LAME providing you with a very rich listening experience. No DRM or copy protection is built in to the mp3s.

Unfortunately at this time we can't offer all the Konono No.1 - Congotronics tracks as individual flacs, as some of these tracks exceed the shops maximum (9mins) download length.

FLAC format technical details:
These FLAC tracks are superior to MP3 in that they are compressed without any loss in sound quality. For further technical details or player tips, visit the Help section

Unfortunately at this time we can't offer all the Konono No.1 - Congotronics tracks as individual flacs, as some of these tracks exceed the shops maximum (9mins) download length.