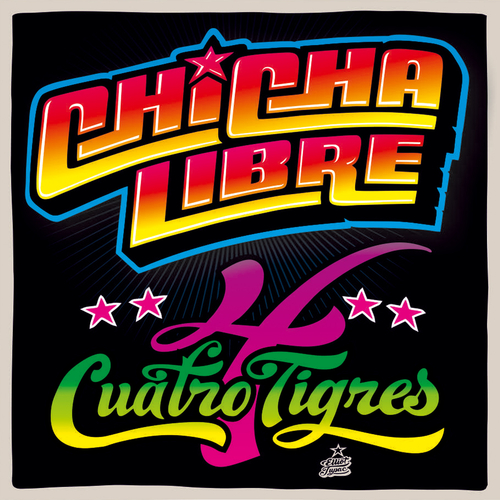 After getting its inspiration from exotic strains of cumbia from the nether hemisphere and writing an album’s worth of mostly original material (on last year’s Canibalismo) Chicha Libre turns its attention to some classic songs from the Anglophone world.

With Cuatro Tigres, Chicha Libre is closing a loop – using a sound that was shaped by Peruvian tropical music to pay tribute to its own rockero roots – and to some of its personal heroes:
- The Clash, who started mixing up global influences before the expression World Music was coined and empowered an entire generation of musicians to stretch the traditional notion of Rock.
- Arthur Lee’s Love, which is still one of the greatest example of psychedelic sophistication, one that has endured and seems more relevant than ever.
- Los Shapis, who were something like the Beatles of Chicha, complete with dozens of hits, stadium filled with screaming fans and goofy movies. On a trip to Peru, Chicha Libre was fortunate enough to spend time with Los Shapis who also joined them on stage for a few songs. Rica Chicha was the first song to use the name of the new genre.
- If anything bridges the pop culture of North and South America, it’s probably the Simpsons, which is as popular in Argentina, as it is in Oregon. When the producers of The Simpsons' 20th anniversary special asked Chicha LIbre to perform the Simpsons theme “chicha” style alongside the likes of Red Hot Chili Pepper and ZZ Top, they were too happy to oblige.

FLAC format technical details:
These FLAC tracks are superior to MP3 in that they are compressed without any loss in sound quality. For further technical details or player tips, visit the Help section

MP3 format technical details
These mp3 tracks have been encoded with LAME providing you with a very rich listening experience. No DRM or copy protection is built in to the mp3s.