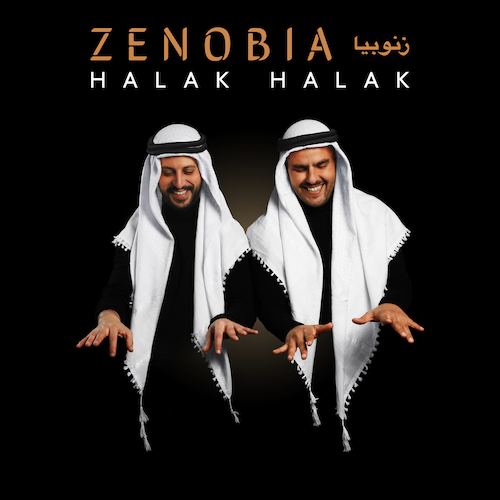 Emerging from the vibrant Palestinian electronic music scene, Zenobia have made a big impression over a short period of time: the band started performing a couple of years ago, and has already toured around the globe.

Zenobia’s music combines powerful beats, Levantine dabke rhythms and Arabic pop melodies. The band draw their inspiration from pop & folk music from all over the region (Egypt, Palestine, Lebanon, Syria). They refine their songs by taking them back and forth between their studio and the stage, where they improvise a lot, and feed off the audience reactions.

The band consists of Nasser Halahlih and Isam Elias. Nasser was a pioneer in the local scene, he was arguably the first Palestinian electronic music producer, back in the late 90s. Young, fleet-fingered keyboardist Isam’s background is in European classical music, he grew up in Nazareth, while Nasser hails from (and still lives) in Shefa Amr, a small town situated between Haifa and Nazareth.

The band’s headquarters are in Haifa, the third-largest city in Israel, which has a relatively large Arab population. Nasser and Isam are thus part of the population variably designated as Palestinian citizens of Israel, Israeli Palestinians, Palestinians of ’48 or simply Palestinian Arabs… this alone exemplifies its peculiar status. In Haifa, the Arab music scene -and the arts scene in general- has been flourishing during the last few years. Artists such as Zenobia have been connecting more and more with other nexuses of the new Palestinian electronic music movement which is developing -regardless of political borders- between Haifa & Ramallah, and extending to Beirut, Amman and the diaspora. Zenobia are among the few bands from their home environment who perform abroad, and this has been very meaningful for their community, who is giving them a lot of support.

Zenobia are named after Septima Zenobia. She was the queen of Palmyra, and ruled over the Levant in the 3rd century AD. Naming the band after her reflects Nasser & Isam’s wish to create contemporary music which draws from ancient Levantine roots, yet can appeal to audiences worldwide. It’s probably also a statement on the growing role of women in the region, and we’re guessing that we’ll hear more about that aspect in the near future.

Zenobia have already brought their irresistibly festive, fiery live show to the Amsterdam Dance Event (NL), the Paris Techno Parade, to festivals such as Fusion and Morgenland (DE), Colors of Ostrava (CZ), Worldstock and Scopitone (FR), Oslo World Music Festival (NO). They’ve performed in London, Berlin, South Korea, Brazil and the Middle East, and will be touring extensively in 2020.

The album is entitled Halak, Halak (a slang expression meaning “Welcome, welcome”), it was recorded and mixed in the Zenobia’s studio in Shefa Amr. It’s the band’s second release, after the introductory EP Ksr Ksr Ksr.

Halak Halak is being released on Acid Arab Records, the special imprint created by Crammed Discs in partnership with Parisian collective Acid Arab.