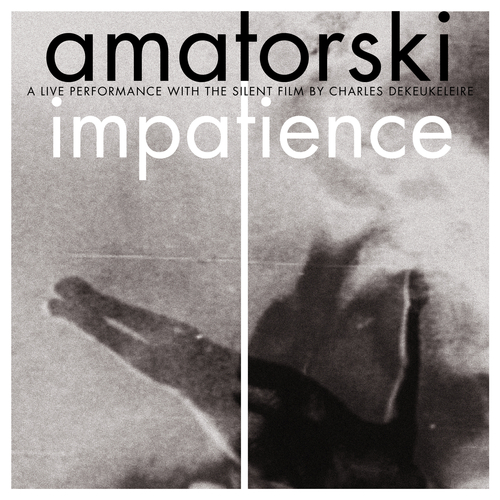 "Impatience" is available in two shapes :

- Limited-edition DVD, comprising
1. Amatorski's live performance of the soundtrack at the Ancienne Belgique in Brussels
2. The original 1928 film, accompanied by the soundtrack
3. A coupon with a unique code for downloading the audio soundtrack

- Digital audio release of the soundtrack

The classiest & most delicate Belgian band around lifts the veil on a wilder side of its music with a limited-edition DVD of a special performance inspired by an experimental movie from 1928.

During Winter 2011/2012, Amatorski created a special live show for which they wrote original music to accompany "Impatience", a film directed in 1928 by Charles Dekeukeleire, an unsung hero of early experimental cinema.

Influenced by the ideas of Futurist and Dadaist artists, Dekeukeleire wanted to create 'pure cinema'. He was only 23 when he directed "Impatience", his second film, which some international film historians place on the same level as Luis Buñuel's Un chien andalou. The film is built around four series of images: 'a motorbike, a woman, a mountain and abstract blocks'. There is no linear storyline, yet the treatment and combination of the elements (human, machine, nature, speed, shapes) is eerily poetic and echoes the works of modernist painters, musicians and writers of that period.

Amatorski wrote a magnificent new soundtrack for the film, a continuous, 36-minute piece which includes abstract sonic textures as well as soaring, enchanting melodies. The show (which was performed on a 30-date theatre tour) consisted of a screening of the movie with a simultaneous live performance of the soundtrack.

Amatorski are now delighted to release "Impatience", as a way to top off what has already been an amazing year 2013, which saw the international release of their debut album "TBC", the launch of their award-winning interactive online project "Deleting Borders" (http://deletingborders.com), the release of a remix album ("re:tbc"), and a series of shows around Europe which garnered them an increasing number of devoted followers.