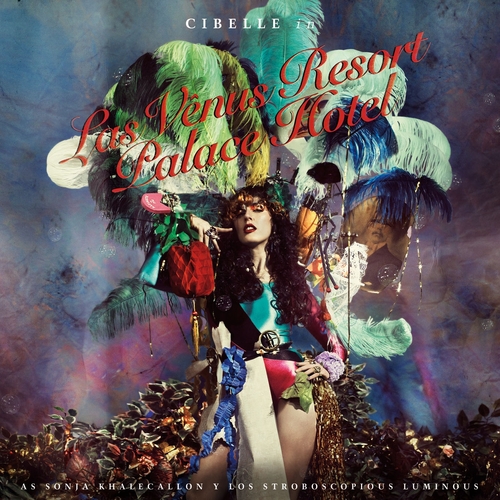 
Just add both the vinyl and the download of your choice (mp3 or flac) to your basket and we'll do the rest.

Please note: the vinyl LP will be ready around May 5

The world has ended. All that's left is a jungle on a floating rock where a paradise nightclub band is playing at the last cabaret on earth: the Las Vênus Resort Palace Hotel.That's where you'll find Sonja Khalecallon and her band Los Stroboscopious Luminous.

Sonja invites you to plunge into her world of warped exotica (inspired by the kitsch and pseudo-exotic style of music that was all the rage in the USA at the start of the 1960s), for a post-nuclear tropical rundown punk cabaret soundtrack of an album comprising nine original songs and three inventive covers: "Mango Tree" (as sung by Ursula Andress in the James Bond film "Dr No"), "Lightworks" (from the eccentric Raymond Scott, a seminal exotica producer and pioneer of electronic music in the 1950s) and "It's Not Easy Being Green" (originally by none other than Kermit The Frog from The Muppets!).

Sonja Khalecallon is in fact one of the alter egos of Cibelle, the London-based tropical punkster whose take on music is entirely her own. With each album it’s a whole new story, a new universe. After her self-titled debut and successful follow-up "The Shine Of Dried Electric Leaves" (both also on Crammed Discs), "Las Vênus Resort Palace Hotel" once again takes the Brazilian-born singer, producer and multi-instrumentalist into fresh and exciting sonic realms.

Cibelle recorded "Las Vênus Resort Palace Hotel" in her London basement, a Vancouver woodland retreat invaded by bears, a homestudio in Berlin and back in her hometown of São Paolo.

“Cibelle has crafted a sophisticated trilingual pop record, spinning twitchy electronics, American freak-folk, and Brazilian traditions into a glittering tableau All the more radiant for their partial construction, Cibelle's songs are marked by a billowing drift, with pliant, meandering melodies and progressions that seem less linear than mutational, evolving toward realization by gradual degrees”
Pitchfork (USA)

"The sound of the summer…however this isn't your average summer… Opening with a Tom Waits cover is risky, but transforming his growl into Joanna Newsom meeting Edith Piaf proves that Cibelle's not only unafraid to mess with preconceptions, she's also a budding star"
NME (UK)

"The ideal soundtrack for indie picnics this summer. It's wonderfully refreshing to find intelligence and unconventionality worn so lightly and sunnily. This is iced mint tea for the ears”
Daily Telegraph (UK)

"Collaborations [with CocoRosie sideman Spleen and with Devendra Banhart] suggest an alignment with the voguish freak-folk scene, but Cibelle steers thankfully clear of the childish contrivances of those acts while retaining the endearingly patchwork quality of their music. There are many moments of spellbinding intimacy to be found here"
The Guardian (UK)

"She's a canny pop amalgamator, experimenting with soundscapes but never forgetting about tunes… Even when her music is most borderless and surreal, she never sounds disoriented"
The New York Times (USA)

"Haunted, cut-up, serenely twinkling electro-acoustic folk-pop… This is my ideal sound and you need to hear it now because then it will be your ideal sound too"
Pop Matters (USA)

Unfortunately at this time we can't offer all the Cibelle - Las Venus Resort Palace Hotel tracks as individual flacs, as some of these tracks exceed the shops maximum (9mins) download length.

Unfortunately at this time we can't offer all the Cibelle - Las Venus Resort Palace Hotel tracks as individual flacs, as some of these tracks exceed the shops maximum (9mins) download length.