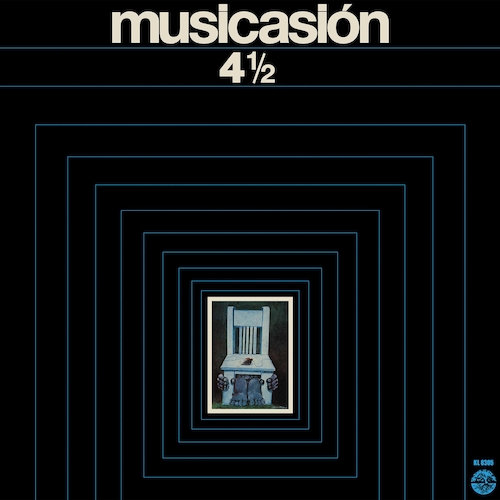 Originally released in 1971, during the dark days of the military dictatorship in Uruguay, this unique album made a strong and lasting impression on Juana Molina when she was a child. The present reissue on Sonamos (Juana’s recently-formed owned label) is the result of a patient labor of love conducted by Juana and her associate producer Mario Agustin Gonzalez. This anniversary release comes our as a very limited-edition containing the remastered original LP, a second LP with 16 unreleased tracks, and a thick, informative booklet.

Musicasión was a series of collective shows by a group of artists, mixing theatrical elements, poetry, improvised stage effects, and of course music, with a very special blend of rock (then called beat, in a dual reference to British pop bands of the sixties and to Beat Generation poetry), candombe (the percussion-driven style created in Uruguay among the descendants of liberated African slaves) tango, jazz and bossa nova. A combination which bears more than a passing resemblance with Brazilian Tropicália, which originated around the same time.

The masterminds behind the concept were the great singer, songwriter & composer Eduardo Mateo, and his friend Horacio Buscaglia, a poet, actor and theatre director. Four different Musicasión productions were staged in 1969 (for a total of 14 performances), featuring musicians from Mateo’s band El Kinto, and a host of other artists. The original album was put together in 1971, using recordings made before and during these performances.

Already a revered singer-songwriter at the time, Horacio Molina (Juana’s father) was acquainted with Eduardo Mateo, who came to visit him when he traveled to Argentina. “Musicasión 4 ½ arrived at my home because Mateo gave it (and dedicated it) to my dad when he came to Buenos Aires to record ‘Mateo solo bien se lame’ in October ’71. I think I do what I do because I listened to Musicasión 4 ½ and Mateo since my early childhood. It’s something I kept to myself (as no one seemed to be interested in it) and that nurtured me without my noticing”, recounts Juana.

Due to then-current circumstances, the original release didn’t reach a large number of listeners outside of Uruguay (where its circulation wasn’t encouraged by the authorities, due to the subversive nature of some of the lyrics and poems). Yet it did exert a subterranean influence. International curiosity for Eduardo Mateo’s work started rising after his death (1990) and the publication of a biography in 1994.

In 2020, in the midst of the pandemic lockdown, a whole additional batch of previously-unreleased tapes made an quasi-magical appearance, opening the possibility of celebrating the 50th anniversary of Musicasión 4 ½ with something more than a reissue. This new edition thus contains the complete original album (remastered from a recently found safety copy), including poems which were self-censored because of their politically-charged content, and left out of the subsequent editions), as well as a second LP with 16 recordings by the same musicians, taken from first generation tapes.

“When I listened these unreleased recordings I almost swooned. The shock of listening El Kinto unissued tracks lasted several days until I could finally listen all the stuff, little by little and with identical intensity. How could such a thing have remained in the dark for so long?”, said Juana.

This beautifully-crafted reissue of a lost masterpiece should be of great interest to music fans worldwide. It comes out in one format only: double vinyl LP (it won’t be available via streaming or download services, due to rights limitations).