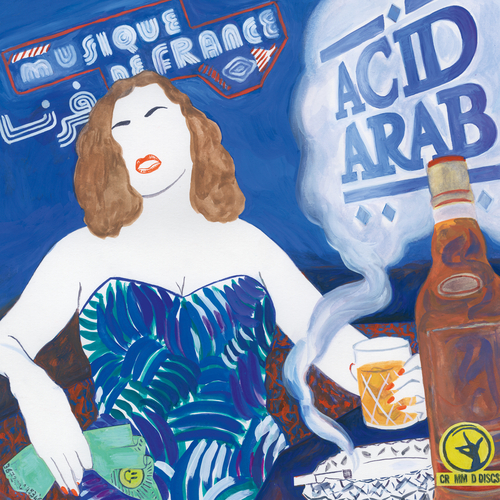 Mighty Parisian electronic music crew ACID ARAB have been putting European festivals and club audiences under a spell for the last couple of years, with their intoxicating blend of sharp Western electronic music with Eastern sounds & vocals.


Formed in 2012 by Parisian DJs Guido Minisky and Hervé Carvalho, Acid Arab patiently honed their style by meeting with scores of artists from all over North Africa and the Middle East. Born in the transcultural cauldron that is Paris, their concept was to create a space for Arab culture in the world of contemporary electronic music. They laid down groundwork by releasing several EPs (the Collections series) on electronic music label Versatile, featuring collabs, remixes and tracks by other artists.


Moving on to create their own tracks, they became a fully-fledged musical entity by teaming up with Pierrot Casanova, Nicolas Borne and, for studio and live activities, with sensational Algerian keyboard player Kenzi Bourras. They are now about to release their first album (on Crammed Discs, an appropriate match, given the label's track record in terms of fostering musical cross-breeding).


No banging techno spiced up with darbouka samples here… no standard dance music with orientalist clichés: Acid Arab's music is sincere and deep. It's not a collage, not an appropriation, not even a "fusion". It originates from encounters on equal terms between different worlds. Between instruments, rhythms, melodic modes, musical technologies… and people.


Locked in Shelter Studio, right in the middle of Paris' supremely cosmopolitan 10e arrondissement (10th district), they strived at making each song tell a story which takes place in a world without barriers and domination. Which is not a fantasy world: it (partly) exists right there, in France, if you care to open your eyes. France is the place where a hip station such as Radio Nova has been broadcasting Arabic music for over thirty years, where Beur FM (a popular, dedicated Arab music station) celebrates its 25th anniversary, where many Algerian singers have been making their records before releasing them in their home country, where Younes Megri created 'Lill Twill', where the likes of Khaled, Mami, Taha (who guests on this album) and Blond-Blond have become proper stars. France is also the home of what was called The French Touch (that influential wave of electronic music which started in the 90s, epitomized by Daft Punk etc), of legendary club nights such as Concrete or Chez Moune (where the band's eponymous nights first took place). In short: Acid Arab haven't traveled abroad to find inspiration for their music. It's right there and has been there for a while, embedded in the soil and in the history of the country.


For 'Musique de France', Acid Arab have worked with a number of guests. To paint a complete picture, they needed voices, and some instruments: keyboards played by Kenzi Bourras (who has been performing live with the band since day one), and also by stellar Syrian musician Rizan Said. There's vocals and saz playing by Istanbul's Cem Yildiz (who wrote the famous song Kime ne for his band Insanlar), and vocals by Yemenite sister trio A-WA (who gained plenty of international kudos with the very first song they released, Habibi Galbi, which got remixed by Acid Arab). And collaborations with Paris-based luminaries of Franco-Arabic music such as rocker Rachid Taha, raï fusion pioneer Sofiane Saidi, as well as gnawa musician/singer Jawad El Garrouge.


All these performances intimately mesh with the album's radically electronic structures and sounds, drawing from a palette of sub-genres (house, disco, trap) while taking in unusual rhythms and colours.

"one of the albums of the year!" Gilles Peterson