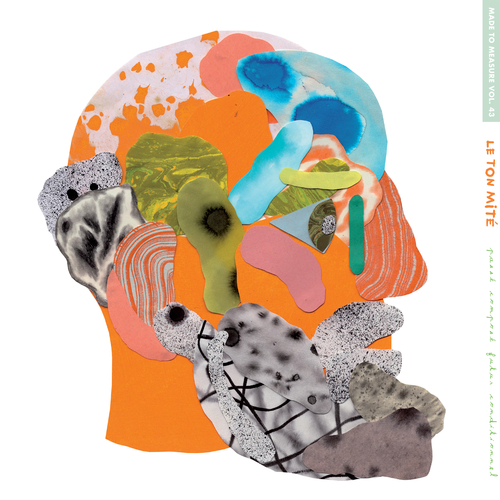 LE TON MITÉ is a musical cooperative that revolves around the compositions of itinerant musician, instrument maker and fine artist McCloud Zicmuse, an American expatriate in permanent residence in Brussels.

Having left the United States in the mid-noughties on a European sojourn that never ended, McCloud wound up in the Belgian capital in the fall of 2008. Half a decade on, a time in which he has embedded himself in European life via puppet shows, archery guilds, folkloric events, theatre projects and a catalogue of idiosyncratic solo and group works (perhaps most recognisably the 2011 Hoquets album on Crammed Discs called 'Belgotronics'), McCloud returned to the States, to revisit places he had not seen, in some cases, for 15 years.

Passé Composé Futur Conditionnel is the stunningly realised soundtrack to this voyage. A finely woven double album patchwork of 50 songs, in its 67 minutes it absorbs a lifetime's worth of landscapes, reflections, encounters, anecdotes and movements. In addition to a core group of Belgian master musicians, a number of songs feature the fruitful intervention of Deerhoof's John Dieterich as well as a keyboard cameo from Heather Trost (A Hawk and A Hacksaw), with the resolutely pop sound of the LTM group rendered dynamic by infusions of jazz, baroque, folk & R'n'B. Thus the album takes endless playful musical diversions in its bittersweet stride, including deep-fried protest soul ('Class War'), Seattle-homaging alt.rock joy ('Space Needle'), spectral synth balladry ('Mystery Trail') and micro-bursts of tumbling free jazz ('Gaspillage'). McCloud is your navigator throughout: showman, troubadour, puppeteer, sage...sometimes everything at once.

On one level a joyous testament to the fast-evaporating wonders of cultural pluralism and roving human spirit, Passé Composé Futur Conditionnel is, at heart, a swan song to McCloud's motherland, a place that never will exist again. It is the battle cry against nostalgia, and the fruit of years of work from a true nomad artist of our culturally flatlined times, the liberation of knowing that home is no longer a place, but a state of mind.