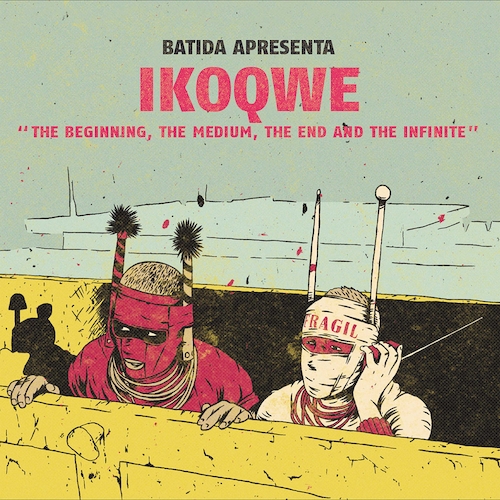 The Beginning, The Medium, The End and The Infinite

IKOQWE - The Beginning, The Medium, The End and The Infinite

IKOQWE are a pair of fictional characters who, coming from a distant time and space, are confronted with today’s world. Their impressions are conveyed over the course of an exciting album which blends electronic music, hip hop and the sounds of ancestral instruments from Angola.

This is no coincidence: IKOQWE stems from the reunion of two old friends: ‘Coqwe’ is Pedro Coquenão, also known as Batida (the Angola-born, Lisbon-raised artist who ranks among the leading exponents of the new wave of African electronic music), while ’Iko’ is Luaty Beirão, aka Ikonoklasta, the Angolan rapper turned iconic activist.

IKOQWE’s inspiration comes from old school Hip Hop as much as from traditional Angolan music. Some of the tracks feature sounds from the rich archives of the International Library of African Music. IKOQWE obtained access to the archives, and sampled sounds taken from field recordings made in Angola by ethnomusicologist Hugh Tracey during the ‘50s. They mostly worked with recordings featuring tngomas, dikanzas and kissanges (thumb pianos), the emblematic instrument used all over Africa, whose popularity was bolstered in the Western music scenes by the spectacular advent of Konono N°1. We may remember that Konono N°1’s latest album was a collaboration with Batida, so this all makes perfect sense…

The music and lyrics were written by IKOQWE and produced by Batida, sometimes in collaboration with key names in Portuguese dance music (Celeste Mariposa co-wrote and co-produced The Medium, Octa Push co-produced Vai de C@n@!), and with South African artist Spoek Mathambo, who worked on Falta Muito?.