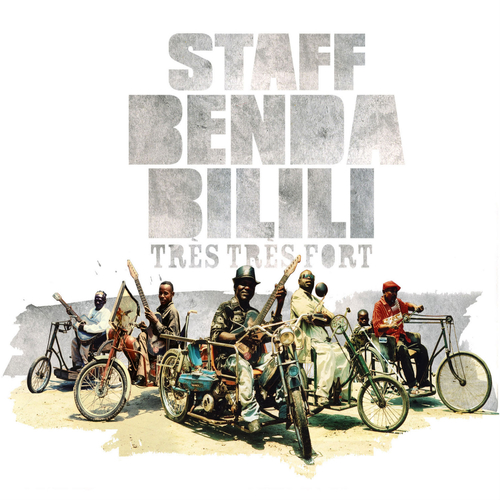 One of the great global success stories of the past two years, Staff Benda Bilili have become an unstoppable force in international music. A group of street musicians who live in and around the grounds of the zoo in Kinshasa, Congo, they make music of astonishing power and beauty. The band’s mesmerising rumba-rooted grooves, overlaid with vibrant vocals and extraordinary tin-can guitar solos, have been dazzling audiences and media the world over, on record, on stage and on the big screen.

Four paraplegic singer/guitarists form the core of the band, assisted by a ‘hype man’ on crutches who whips the crowd into a frenzy, and backed by an all-acoustic rhythm section pounding out tight grooves. Then, on top of everything, are those inimitable and infectious solos performed by a teenage prodigy on a one-string electric lute he designed and built himself out of a tin can.

Staff Benda Bilili ripped through Europe for the first time in late 2009, spreading the word about debut album 'Très Très Fort' with one of the most talked-about tours of 2009. The continent's media responded in a chorus of praise, with top TV shows (including BBC Newsnight), broadsheet newspapers and world-renowned radios lavishing the band and their album with attention and end-of-year plaudits.

Now it’s 2011, and “Benda Bilili”, a documentary film on the band shot over the past few years by French filmmakers Florent de la Tullaye and Renaud Barret, premiered at the prestigious “Director’s Fortnight” event at the 2010 Cannes Film Festival. The band proved to be one of the sensations of the festival, with reviews describing them as “The Kinshasa social club” (The Times), and the film as “a rousing depiction of unimaginable poverty and transcendent résolve” (Hollywood Reporter) as well as “"a remarkable documentary and an amazing music film" (Telegraph).

In world music circles, this eight-piece from the Congo are the most talked about band of the year -Daily Telegraph

Not only do they sound incredible, they exude an inscrutable cool ... In the crowd, jaws drop, as well they should in the presence of such an extraordinary band -Guardian, 5 stars

These are musicians of extremely humble means who create startling warm and vital music from the barest of resources. Making their story even more poignant is that these artists are paraplegics and polio victims. It’s a compelling story for sure, but the music is superb enough to speak for itself. (Pop Matters, USA)

Staff Benda Bilili - The masters of survival, the sound of the ghetto… The musicianship is subtle and precise, forged by the group's extraordinary work ethic, and their sound has a raw simplicity and uniqueness. (The Independent, UK)

It was a perfect moment, symbolising the purpose of the Africa Express trip to the Congo: some of the most celebrated musicians in Africa and the West playing with members of Staff Benda Bilili, a group formed by homeless and disabled polio victims living in the grounds of Kinshasa Zoo. It was unrehearsed, teetered on the edge of disaster, yet inspirational. (…) The band swayed in time in their antiquated wheelchairs, while a couple of kids danced around. It was achingly lovely music, created out of the most terrible adversity. ‘That was beautiful,’ said [Massive Attack's] Robert del Naja at the end, visibly moved. ‘It was worth coming all this way just to hear that’. (The Independent, UK)

(The makeshift instrument) designed by young Roger Landu is particularly amazing. Made with a simple powder milk tin, a stick and a metal wire, plugged to a pedal and an amp, it generates a riotous guitar-like sound that would make Jimi Hendrix turn pale. (Volume/Les Inrockuptibles, France)

Unfortunately at this time we can't offer all the Staff Benda Bilili - Très Très Fort tracks as individual flacs, as some of these tracks exceed the shops maximum (9mins) download length.

Unfortunately at this time we can't offer all the Staff Benda Bilili - Très Très Fort tracks as individual flacs, as some of these tracks exceed the shops maximum (9mins) download length.